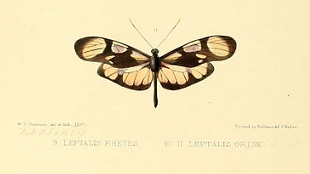 A male Leptalis orise, discoverd in the 1800sWikimedia, William Chapman HewitsonIt often takes researchers more than 2 decades to officially name and publish a description of a newly discovered species, according to a study published yesterday (November 20) in Current Biology. Because of this delay, some of the species may become extinct before they are officially cataloged—possibly throwing off estimates of extinction rates and biodiversity.

“Papers like this are good: they help us identify the bottlenecks in the process," Quentin Wheeler, at the International Institute for Species Exploration at Arizona State University told ScienceNOW.

Researchers from the National Museum of Natural History in Paris investigated the nearly 17,000 new species published in 2007 and picked 600 to analyze more closely.  Surprisingly, the lag time for professional biologists averaged about 21 years with a median of 12 years, whereas it took only 15 years for...

The reason for the huge lag time is manifold. Once specimens are collected and brought back to the lab, researchers must do extensive research to rule out that the species hasn’t already been discovered. This entails extensive literature searches, as well as travel to examine similar specimens in museum or laboratory collections. In addition, the publication of new species isn’t likely to garner the attention of high profile journals, making the projects a lower priority for many researchers.

Regardless of the reasons, "a median shelf life of 12 years is catastrophic," Lee Grismer, a biologist at La Sierra University in Riverside, told ScienceNOW. "We will not save biodiversity with this."