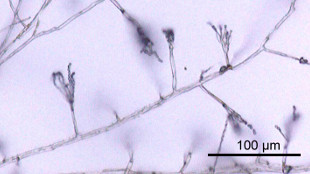 microscopic image of Penicillium sp.Wikimedia, Y_tambeDigging 127 meters below the Pacific Ocean floor, into 100 million year-old sediments, researchers have discovered flourishing fungi, including some that belong to the genus Penicillium—the source of penicillin. The discovery, reported last week (December 6) at the meeting of the American Geophysical Union in San Francisco, California, provides hope of finding novel antibiotics deep below the ocean, as well as understanding how life can thrive in such a nutrient-poor environment.

“[The study] extends what we understand about the limits of life on the planet,” molecular geo­microbiologist Heath Mills of the Texas A&M University in College Station, who studied the fungi, told Nature.  Moreover, “this is adding a new family of potential drugs,” added biogeochemist Brandi Reese, of the University of Southern California in Los Angeles, who collaborated with Mills on the study.

The researchers isolated the fungi from sediments collected...

Mills and Reese hypothesize that the fungi may play critical roles in the deep-sea sediment ecosystems, such as deconstructing organic matter in the ancient sediment for other organisms to use. Moreover, the remote fungi may have evolved unique biological weapons—antibiotics—to defeat competing microbes in its unique environment. “What if this is a new version of penicillin?” Mills posed to Nature—one that may be effective against pathogens that have grown resistant to traditional antibiotics “That’s one of the benefits of going to the deep biosphere.”