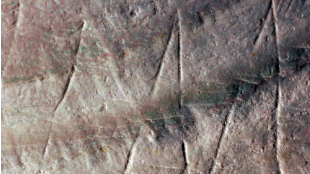 Detail of the engraving on fossil Pseudodon shell (DUB1006-fL) from TrinilWIM LUSTENHOUWER, VU UNIVERSITY AMSTERDAMThe history of abstract expression continues to stretch back in time. In October, researchers described Neanderthal cave art from 39,000 years ago. And this week (December 3), archaeologists reported in Nature that an engraved shell from Java was the work of a Homo erectus individual 500,000 years ago.

“If correct it certainly pushes back in time the evidence for marking objects in a way that arguably could be considered evidence for symbolic activity,” Curtis Marean, an archaeologist at Arizona State University who did not participate in the study, told Science.

The shell was originally discovered in 1891, but it wasn’t until a few years ago that Stephen Munro of the Australian National University in Canberra, then a graduate student, and Josephine Joordens of Leiden University in the Netherlands, initiated a closer analysis. The...

“This forces us to reassess not only the capacities of Homo erectus, but the criteria we use to gauge the behavioral evolution of our own species,” Kat Szabo, an archaeologist at the University of Wollongong, told Smithsonian.com.

The meaning of the etching is indecipherable, but neuroscientist David Edelman told New Scientist it’s irrelevant. “Regardless of intent, the very process of rendering a geometric form would seem to indicate the workings of a mind no longer tethered solely to the here and now, but capable of a uniquely abstract form of conscious ‘wandering.’”