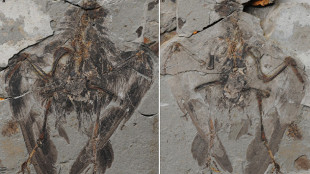 After birds began to evolve separately from dinosaurs at the end of the Jurassic period (around 150 million years ago), two groups of species developed. The Enantiorinthes, which had teeth and clawed wings and did not fly well, went extinct 66 million years ago, while the Ornithuromorpha evolved into modern birds. Previously, the oldest known ornithuromorph fossil was dated to 125 million years ago.

In the new study, scientists from the Chinese Academy of Sciences, the Tianyu Natural History Museum of Shandong, China, and Macquarie University in Australia identified the fossils...

“The feathers are really beautiful. It is incredible how they were preserved so well for 130 million years,” study coauthor Min Wang of the Chinese Academy of Sciences told The Guardian.

However, since later specimens are in some ways less similar to modern birds than the new species, there is most likely an even older ancestor yet to be discovered. “The most primitive bird of Ornithuromorpha is most likely from older deposits than what we discovered now,” Wang told The Washington Post.