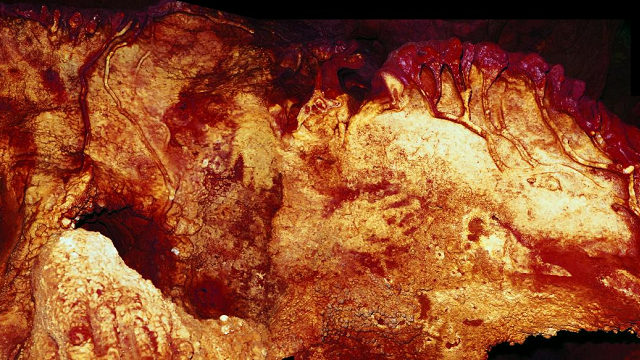 Hand stencils in Maltravieso Cave in SpainH. COLLADOThe oldest known cave paintings were created more than 64,000 years ago, and were not made by modern humans, according to a study published last week (February 23) in Science. Instead, the report concludes, the artists were probably Neanderthals. The findings add to mounting evidence that our ancient hominin cousins were capable of greater cultural and creative complexity than generally assumed.

“Neanderthals appear to have had a cultural competence that was shared by modern humans,” John Hawks, a paleoanthropologist at the University of Wisconsin-Madison, who wasn’t involved with the study, tells National Geographic. “They were not dumb brutes, they were recognizably human.”

The paintings, distributed across three caves in Spain, consist of black and red images of animals, as well as dots, hand stencils, and handprints. Using uranium-thorium dating, the University of Southampton’s Alistair Pike and colleagues found that...

“This constitutes a major breakthrough in the field of human evolution studies,” Wil Roebroeks, an archaeologist at Leiden University who was not involved in the study, tells The New York Times. “Neanderthal authorship of some cave art is a fact.”

For study coauthor Joao Zilhao of the Catalan Institution for Research and Advanced Studies in Barcelona, the findings point to further parallels between modern humans and Neanderthals. The two species “shared symbolic thinking and must have been cognitively indistinguishable,” he says in the statement. “On our search for the origins of language and advanced human cognition we must therefore look much farther back in time, more than half a million years ago, to the common ancestor of Neanderthals and modern humans.”

Correction (February 27): This article’s original wording suggested that Neanderthals were not humans. We have thus changed “humans” to “modern humans” in the headline and main text to remove ambiguity. The Scientist regrets the error.