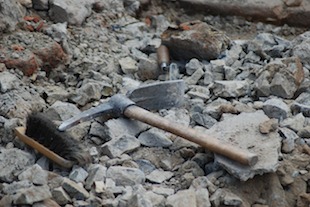 Researchers recently announced having extracted proteins from 3.8 million-year-old ostrich eggshells—the oldest intact preserved proteins on record. In a keynote address at the International Symposium on Biomolecular Archaeology on September 15, Matthew Collins of the University of York in the U.K. reported recovering the proteins at a fossil site in Laetoli, Tanzania, Science reported.

Collins and colleagues also extracted and sequenced proteins from 1.7-million-year-old fossilized teeth at a site in Dmanisi, Georgia, according to Science. The teeth appear to come from extinct horses, rhino, and deer, but this has yet to be confirmed by amino acid analyses.