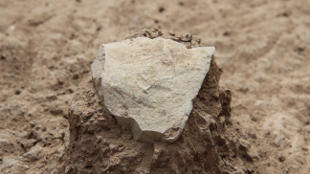 One of the stone tools unearthed at the Kenyan excavation siteMPK-WTAPScientists have long considered members of genus Homo to be the originators of complex stone tool manufacture and use. But a newly reported find is forcing a reconsideration of human history. Researchers working in Kenya have found 3.3-million-year-old stone cores and flakes, which indicate the manufacture of tools and are about 700,000 years older than the artifacts previously considered the oldest stone implements. The newly discovered stone tools are more than half a million years older than the oldest fossils belonging to species in genus Homo. “It really absolutely moves the beginnings of human technology back into a much more distant past, and a much different kind of ancestor than we’ve been thinking of,” Alison Brooks George, a George Washington University anthropologist who was not an author of the paper announcing the discovery but who has examined the artifacts, told The Christian Science Monitor.

Stony Brook University researchers Sonia Harmand and Jason Lewis and their colleagues reported the details of the find in Nature last week (May 21). “The magic is being able to touch these stone tools for the first time, after 3.3 million years,” Harmand told NPR. The paper describes about 150 stones and flakes from west of Lake Turkana in the Kenyan Rift Valley.

Researchers don’t know which species created the tools, but suggested that it could have been an as-yet undiscovered species of Homo or members of Australopithecus afarensis—the species of ancient human ancestor of which the fossil skeleton dubbed Lucy is the best-known representative. Researchers have found the fossil remains of another species, Kenyanthropus platyops, in the vicinity of the site where the stone tools were unearthed. 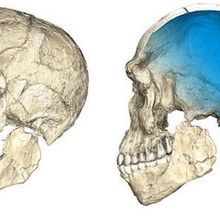 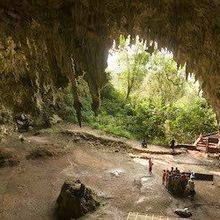