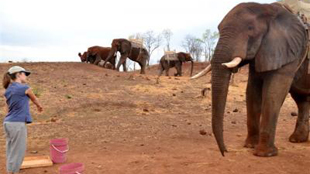 EUREKALERT, ANNA F. SMET AND RICHARD W. BYRNETo date, the only nonhuman animals that have demonstrated an ability to understand pointing are dogs. Even chimpanzees, man’s closest genetic relatives, do not seem to understand the gesture. But research published this week (October 10) in Current Biology provides evidence that African elephants can understand a human’s point—about as well as a human toddler.

Scientists Anna Smet and Richard Byrne of the University of St. Andrews in the United Kingdom worked with a group of eleven captive elephants, which had been trained to give humans rides at a safari park in Zimbabwe. Smet hid food in one of two five-gallon buckets and then indicated to the elephants where the food was by pointing and looking back and forth from the bucket containing the food to the elephant until it made a choice. The elephants chose the correct bucket on...

Surprisingly, the elephants chose the correct bucket just as often in initial trials as they did in later ones. Smet and Byrne suggested in the paper that elephants comprehend pointing without having been trained to recognize the gesture. “It seems that understanding pointing is an ability elephants just possess naturally and [that] they are cognitively much more like us than has been realized,” Smet told BBC News.

Diana Reiss, an animal behavior expert from Hunter College in New York City, told The New York Times that Smet and Byrne’s findings were intriguing, but she cautioned that these elephants might have had opportunities to learn pointing from watching their human handlers in the safari camp. “In these elephant camps such opportunities can easily go unnoticed by their human caretakers,” she said.