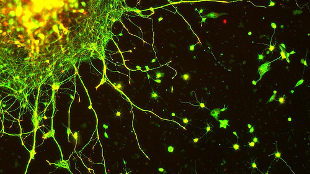 FLICKR, MR MCGILLMutations in a single gene can play roles in multiple neurological disorders, such as schizophrenia and bipolar disorder. Neuroscientists at MIT have identified a gene, Shank3, that plays a functional role in both schizophrenia and autism, they reported yesterday (December 10) in Neuron.

“This study gives a glimpse into the mechanism by which different mutations within the same gene can cause distinct defects in the brain, and may help to explain how they may contribute to different disorders,” study coauthor Guoping Feng of MIT said in a press release.

Shank3 codes for a protein that organizes molecules across a neuronal synapse. By mutating the gene to remove the protein altogether, the researchers previously showed that they could induce autism-like traits in mice. In 2010, researchers from the University of Montreal linked the gene to schizophrenia.

Feng and his colleagues investigated the mechanism behind the...

The mutations affected the mice at different points in their development. Mice with the autism-related defect showed social symptoms early on, while those with the schizophrenia-related mutation were affected most strongly as adults.

“These data demonstrate that different alleles of the same gene may have distinct phenotypes,” the authors wrote in their paper. “Together, our study potentially provides a mechanistic explanation on how distinct mutations of the Shank3 gene may lead to distinct molecular, synaptic, and circuit defects and relevant behavior abnormalities.”