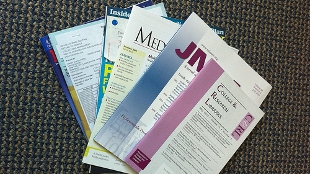 “We are doing things that no other publisher is doing,” said Jason Hoyt, Co-Founder and CEO of PeerJ, in a press release. “The global academic community pays as much as $9.5B per year for access to academic journals. We believe that these costs could be reduced by as much as 75 percent using new business models.”

PeerJ comes in the midst of an ongoing debate about the foundation of science publishing, and a push by many in the research community to be more open. (See “Whither Science Publishing?” for a full discussion.) The journal has assembled an editorial board of 800 academics along with an advisory board that includes five Nobel laureates. The decision of whether to publish a submitted manuscript is based more on scientific validity...

One of the studies published yesterday is a neuroscience study of Penn and Teller’s “Cups and Balls” magic trick.  Hailed as one of the oldest tricks in history, “we still don’t know how it works in the brain,” one of the study authors said in a release. The researchers tracked the attention of observers of the trick to see when it becomes diverted.