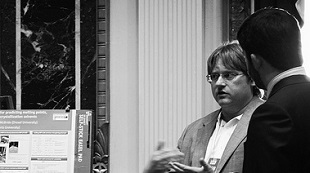 Bradley (left) speaks at the White House in 2013.FLICKR, OPEN SCIENCE FEDERATION, BRIAN GLANZJean-Claude Bradley, a chemist at Drexel University, has died. He was a vocal advocate for “Open Notebook Science”—a term he coined—and urged researchers to make their results for both successful and failed experiments available to the public online in real time.

“It is only a matter of time before the internet is saturated with free knowledge for all,” Bradley wrote in Chemistry World in April, as quoted in a May 14 announcement from Donna Murasko, the dean of Drexel’s College of Arts and Sciences.

Bradley orchestrated creating an island in the virtual world “Second Life” on behalf of Drexel to use as a novel teaching tool for students. In June 2013, Bradley was invited to the White House to speak about open science. He discussed experiments where his team had determined the melting points of...

“JC was driven, he was humble, he was a doer. He challenged the status quo with the spirit of a change agent but without the arrogance and brutality of some in the world of openness in chemistry,” Bradley’s friend and colleague Anthony Williams wrote at his blog.