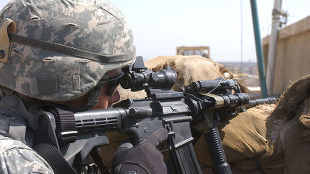 WIKIMEDIA, BAGHDADResearchers have identified an opioid receptor gene whose expression is altered in the brains of mice subjected to severe stress. Furthermore, treating mice with a compound that targets this receptor prevented the development of excess anxiety and fear, symptoms similar to those of post-traumatic stress disorder (PTSD). The findings, published this week (June 6) in Science, point to a new drug target for the treatment of PTSD in humans.

The molecular mechanisms in the brain that drive PTSD are not well understood, though recent studies have suggested that pain-relieving opioids might inhibit the development of the disorder. Evidence to back that up came from work by Kerry Ressler of Emory University in Atlanta and colleagues, who were studying gene expression in the mouse amygdala—a part of the brain is activated by fear and stress. They found that a gene called Oprl1 (opioid receptor-like 1), which encodes the...

Ressler and colleagues then teamed up with another group to test the effects of a compound called SR-8993, which selectively activates the nociceptin receptor. They found that when injected in the amygdala of mice shortly after a stressful experience, SR-8993 inhibited the formation of fear memories. It’s not clear if the same would apply in humans, of course. But the researchers did find that, of 1,800 people who have experienced high levels of violence and trauma in their lives, people who carry a particular variant of Oprl1 tended to suffer from more severe PTSD than those who did not have the variant.

“While many hurdles remain for SR-8993 or a related compound to become a drug used to prevent PTSD, these results are important first steps in understanding how such treatments may be effective,” study coauthor Thomas Bannister of the Scripps Research Institute in Florida said in a press release.

(Hat tip to Only Human)