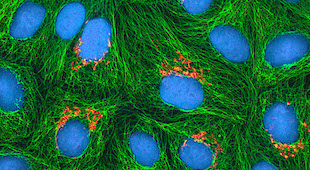 HeLa cellsWIKIMEDIA, NIHOprah Winfrey will star in an upcoming HBO Films movie based on Rebecca Skloot’s book “The Immortal Life of Henrietta Lacks,” Variety reported yesterday (May 2). In addition to producing the film, Winfrey will play the role of Deborah Lacks, daughter of Henrietta Lacks, whose cells were harvested and used without her permission and have played an essential role in medical research.

“Thrilled about this for many reasons. Top on list:Deborah Lacks dreamed @Oprah would someday play her in #HeLa movie,” Skloot tweeted yesterday.

Henrietta Lacks died in 1951, but her cancerous cells, dubbed HeLa cells, formed the basis of an immortal cell line that helped lay the foundation for a polio vaccine, as well as for some cancer and HIV research, according to The Verge. The book and film tell the story of Lacks and her family, whose contributions went unrecognized for decades.