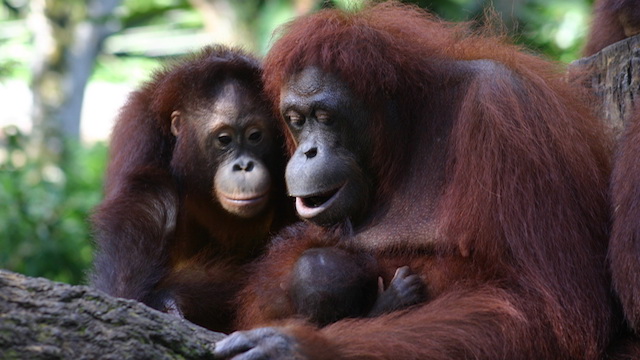 Orangutans nurse their young for up to eight years, longer than any other mammal, according to a study published this week (May 17) in Science Advances.

To determine how long orangutans nursed their young, scientists assessed levels of barium, a trace element that is absorbed through maternal milk into offsprings’ teeth and bones. “This paper represents an exciting new method of determining weaning age from the teeth of wild primates,” Cheryl Knott, a biological anthropologist and director of the Gunung Palang Orangutan Project in Indonesia who was not involved in the study, told National Geographic.

Smith and colleagues analyzed nine teeth from four museum samples of young animals, two Bornean organutans (Pongo pygmaeus) and two Sumatran orangutans (P. abelii), and found that barium levels increased during the first year of life and started to decline when the animals were between 12 and 18 months old. However,...

The team also found an association between high barium levels and periods when food was scarce. “When times are tough, adult orangutans will fall back on things like bark or hard seeds,” study coauthor Tanya Smith, an associate professor in the Australian Research Center for Human Evolution at Griffith University, told The New York Times. “But offspring may not have the ability to eat some of these foods, or the knowledge to find them on their own, so they’re maybe falling back on mothers’ milk during periods of scarcity.”