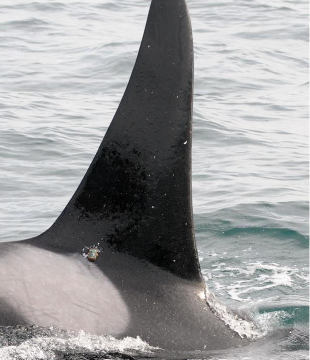 The satellite tag at the base of L95's dorsal fin, before infection set inIMAGE COURTESY NOAA FISHERIESOrcinus orca) to track its movements and try to determine why its population—whales that spend summers in Washington’s Puget Sound and Canada’s Strait of Georgia—is in decline. The 20-year-old killer whale, given the identifier L95 (“Nigel”), washed up dead on Canada’s Vancouver Island about a month later. Last week, (October 5) a panel of researchers found that the tagging of the marine mammal likely led to the fungal infection that ultimately claimed its life.

The federal agency is “deeply dismayed that one of their tags may have had something to do with the death of this whale,” NOAA Chief Science Advisor Richard Merrick, a former whale researcher, told National Geographic.

The accident, which seems to have resulted from improper sterilization of the dart that held the satellite tag, has raised...

Satellite tagging “is becoming more widespread, becoming commercially available to scientists all over the world, but the level of experience and training people have around the world varies,” Alex Zerbini, a NOAA scientist who has studied the impacts of tagging on whales, told National Geographic. “We need to be very careful. We need to take every precaution.”

According to the investigation into L95’s death, the satellite tag likely introduced a fungal pathogen into the animal’s circulatory system, and its already-weakened immune system could not fight off the infection.

NOAA has suspended the tagging of endangered orcas, and the agency will assess whether to pursue less invasive tracking methods, such as acoustic monitoring, according to National Geographic.

“There are only 82 of these orcas left. Each whale matters,” wrote Giulia Good Stefani, an attorney with the Natural Resources Defense Council, wrote in a blog post published last week (October 7). “We can learn from the loss of Nigel, and together help ensure losing him was not for nothing.”