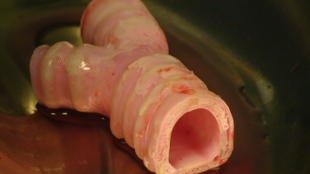 An artificial trachea, similar to those transplanted by Macchiarini, made by seeding an inorganic scaffold with stem cellsUCL Stories presented in a Swedish documentary series have prompted the Karolinska Institute to re-examine its investigation of Paolo Macchiarini, the regenerative medicine researcher and surgeon the institution cleared of misconduct in August 2015, Retraction Watch reported this week (February 1). Macchiarini previously faced allegations of misrepresenting data in papers leading to his implantation of artificial tracheae in patients.

“The programmes contained information that was unknown to the university management, which means that the inquiry into suspected scientific misconduct might be reopened against Professor Macchiarini,” the institute said in a January 28 statement. “My conclusion is that we need to examine and evaluate the claims made in the documentary, and will be reopening the inquiry if there is reason to do so,” added Karolinska Vice-Chancellor Anders Hamsten.

Among other things, the...

“If the information presented is true, the activities in Russia do not comply with KI rules and what we expect from our employees,” Karolinska spokesperson Claes Keisu told Nature.

Two days after the institute announced its latest inquiries, Macchiarini told Nature in an email that he was “in the process of presenting all the multidisciplinary conference discussions that were had around each patient’s case—along with the ethical committee decisions that approved them—to the Karolinska Institute. . . . I can assure you that large teams were involved in the decision-making process for every single patient, and that the patients themselves were also fully aware of the decisions they were making.”