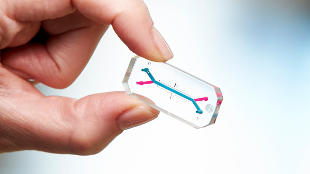 Emulate’s Thrombosis-on-ChipEMULATEOrgan-on-a-Chip technology has not yet hit the mainstream, but a newly inked deal between a Boston-area startup and a big pharma firm is bringing the approach closer than ever. Emulate, a company that was spun off last year from research at Harvard’s Wyss Institute, makes a device called “Thrombosis-on-Chip,” which models the molecular events that lead to blood clots within the body. Johnson & Johnson (J&J), through its Janssen Biotech unit, is now using Emulate’s chip to test early drug candidates in three preclinical drug programs. “It really will help us in the near term begin to make decisions about which things we should advance and spend more time on,” Michelle Browner, J&J’s senior director of platform innovation and partnership management, told Xconomy.

According to Emulate’s Chief Scientific Officer Geraldine Hamilton, the deal—financial terms of which are not being disclosed—will mean that the company can now...

Other organs-on-chips are in development, such as a Liver-on-Chip, and the technology is expected to become more prevalent in pharmaceutical development in the coming years. “Ultimately, we would love to be seen as a catalyst in this area,” Dashyant Dhanak, J&J’s global head of discovery sciences, told Bio-IT World.