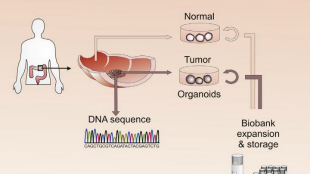 VAN DE WETERING ET AL./CELL 2015To more faithfully recapitulate cancers in the lab, researchers have built upon existing methods for creating three-dimensional intestines in a dish to grow these so-called organoids out of tumor samples. The scientists used tissue from 20 colorectal cancer patients to create 22 tumor-derived organoids and 19 organoids from the patients’ normal intestinal tissue.

“This is the first time that a collection of cancer organoids, or a living biobank, has been derived from patient tumors,” study coauthor Mathew Garnett, a geneticist at the Wellcome Trust Sanger Institute, said in a press release. “We believe that these organoids are an important new tool in the arsenal of cancer biologists and may ultimately improve our ability to develop more effective cancer treatments.”

Currently, cells lines and xenotransplantation of tumors into mice are the best methods for studying cancers in the laboratory. But cell lines offer...

Garnett and his colleagues analyzed genetic mutations of the cancerous organoids, finding them similar to the original tumors. “They capture most if not all of the most important mutations,” Eduard Batlle at the Institute for Research in Biomedicine in Barcelona, Spain, who was not part of the study told Science News. Then the team used the organoids to screen 83 drugs, finding the tumor cultures responded as would be expected based on their genetic profiles.

“Here, we demonstrate that the organoid culture platform can be exploited for genomic and functional studies at the level of the individual patient at a scale that cannot be achieved by existing approaches,” the authors wrote.

According to Science News, two clinical trials are already taking advantage of tumor-derived organoids. One is examining how well organoids can predict a patient’s response to a drug, and the other will look at potential treatments for patients with a cancer that has spread in the body.