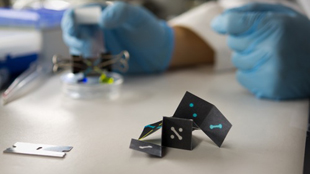 Home pregnancy tests use simple, one-dimensional paper sensors to detect a hormone called hCG that increases at the onset of pregnancy. Now, chemists at The University of Texas at Austin have developed an analogous, but 3-D, paper sensor that can provide results for complex tests such as malaria and HIV and can be printed on an ordinary office printer for a cost of less than 10 cents apiece.

“This is about medicine for everybody,” Richard Crooks, who led the study, said in a press release. The sensor design was published this week in Analytical Chemistry.

The origami-like sensors work like a home pregnancy test—a hydrophobic material such as wax is printed into tiny channels on chromatography paper. Those channels direct the sample—urine, blood, or saliva—to spots on the paper where test reagents have been embedded, which react by turning a specific color, for example....