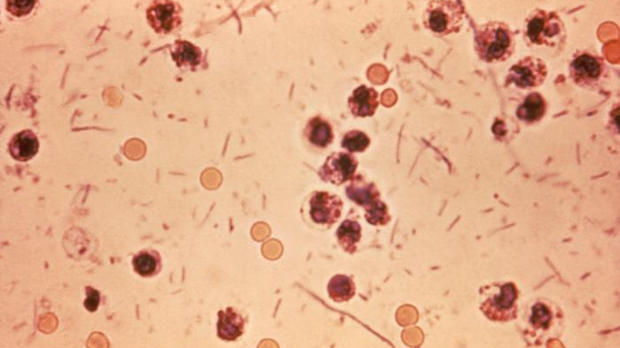 A stool sample from a patient infected with Shigella dysenteriaeWIKIMEDIA, CDCShigella dysenteriae, the bacterium that causes dysentery, originated in Europe and was spread to the rest of the world decades ago by emigrants and colonizers, according to a new genomic analysis of hundreds of strains of the pathogen. Researchers and historians previously suspected that European travelers had brought the deadly disease back with them from South America, Asia, or Africa. But the new findings, published in Nature Microbiology this week (March 21), tell a different tale.

An international team used high-throughput technology to sequence more than 300 strains of type 1 S. dysenteriae in samples collected from the early 20th century until 2011 at sites around the globe. The researchers detailed differences in the strains that caused various outbreaks throughout history, and surmised that type 1 S. dysenteriae dates to at least the 18th century.

Dysentery still plagues human populations in Asia, Africa, and the Americas, with the last major outbreak killing 20,000 Central Americans between 1969 and 1972. To that end, the researchers also detected genomic signals pointing to the development of antibiotic resistance, which has left only 1 percent of circulating S. dysenteriae strains vulnerable to antibiotics since the 1990s. “This bacterium is still in circulation, and could be responsible for future epidemics if conditions should prove favorable—such as a large gathering of people without access to drinking water or treatment of human waste,” study coauthor François-Xavier Weill of the Pasteur Institute’s Enteric Bacterial Pathogens Unit said in the statement. “This study highlights the need for an effective vaccine, which will be crucial for controlling this disease in the future in view of the reduced efficacy of antibiotics.”