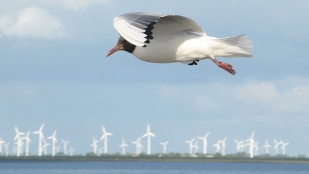 Although wind turbines aren’t the biggest killer of flying animals, they appear threaten species that are high conservation priorities, such as the US golden eagle and bats.  Researchers hope that by working with renewable-energy companies to collect data and developing methods to mitigate the risk to these animals, they can reduce the overall damage caused by the enormous blades that can spin at nearly 170 miles per hour.

In Spain, ornithologists have employed the unusual method of watching the skies for migratory raptors headed in the direction of 13 wind farms in the southern part of the country, and calling engineers in company control towers, who then stop the turbines until the birds have passed. The method appears to have reduced mortality by 50 percent, with only a 0.07 loss in energy production, reported Nature.

Although companies collect data on animal fatality, few publish that data for fear of lawsuits or political attacks. However, the American Wind Wildlife Institute, made up of both conservation and industry organizations, is attempting to change that by creating a data repository that researchers would have access to, while protecting companies. The project is expected to be completed this summer.