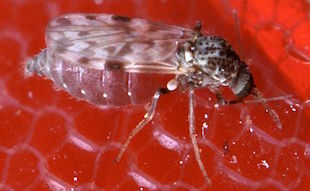 Biting midgeWIKIMEDIA; SCOTT BAUER, USDA ARSThe World Health Organization (WHO) last week (June 3) reported an outbreak of Oropouche fever—a viral infection accompanied by symptoms that could be mistaken for Zika virus, dengue, yellow fever, or chikungunya infections—in Peru. The country’s ministry of health reported 57 cases of the disease in early May, according to the WHO. Most of the cases were detected in January, and presented in the northern Cusco Region of Peru, the WHO added.

The Peruvian Ministry of Health and the WHO conducted a joint field mission to Peru’s Madre de Dios Region in February, finding a mixed outbreak of dengue virus and Oropouche virus infections. This region previously had an outbreak of Oropouche (in 1994), but the latest one is larger, with 120 confirmed cases to date. Seventy-nine percent of the confirmed Oropouche cases were detected in January, 7 percent in February, and 14...

Oropouche is transmitted through the bite of the Culicoides paraensis midge. The virus causes symptoms similar to those associated with Zika and other related viruses, including sudden-onset high fever, headache, myalgia, joint pain, and vomiting. As such, the WHO has called for Oropouche virus to be included in the clinical differential diagnosis of these diseases.

The WHO also recommended reducing the number of water habitats for midge larvae and using screens and insect repellants to reduce the virus’s spread. There have been no known cases of human-to-human transmission of Oropouche, the WHO noted.