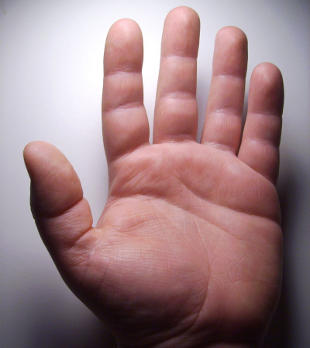 WIKIMEDIA, WURDBENDURThe human hand has long been considered a recently derived feature of our species, shaped by the tool making—and subsequent survival advantages—of our early ancestors. But a new study, published this week (July 14) in Nature Communications, is turning that notion on its head. Researchers studying the hand shape of living primates (including humans) and extinct human ancestors have determined that the human hand shape—a relatively long thumb with relatively short fingers—may have been with us since we last shared a common ancestor with chimpanzees.

“Our results indicate that our overall hand proportions haven’t changed that much—they have been inherited from a last common ancestor that was, in this respect, more similar to a human than to a chimpanzee,” lead author Sergio Almécija of Stony Brook University in New York told The Christian Science Monitor. “Thus, when the humans first started to produce stone tools systematically,...

The results “fit very nicely with the view . . . that the human hand is best described as primitive,” Tracy Kivell, an anthropologist at the University of Kent in the United Kingdom, told Science.

Almécija told Science that rather than being a derived trait that resulted from the selective pressure of building better tools using an increasingly precise grasp, the human hand shape may have evolved earlier because it made human ancestors better at foraging a diversity of foods.

But not all paleoanthropologists are buying the new assertions. Almécija and his colleagues “build an evolutionary scenario based on one data point, bony proportions of hands, with the underlying assumption that they tell a story,” Adrienne Zihlman, a primatologist at the University of California, Santa Cruz, told Science. A more complete reconstruction of the physiology of human ancestors is necessary to tell such a story, Zihlman added. “This paper serves as a poster child for what is wrong with a lot of work in paleoanthropology.”