The World Health Organization (WHO) released a worldwide health alert Sunday (September 23) after the United Kingdom’s Health Protection Agency (HPA) confirmed that a newly identified virus—genetically related to the SARS virus—has infected a second patient, who was last reported in critical condition in London.

The virus was first identified this summer in Saudi Arabia following the death of a 60-year-old pneumonia patient. It is a type of coronavirus, a group that includes cold viruses as well as the SARS virus, which caused a global outbreak of severe respiratory illness between 2002 and 2003, killing more than 700 people. So far, health experts are optimistic that the new virus will not have the same tragic spread.

“SARS was very quick off the mark, infecting hospital staff etc., and this new virus does not to me appear to be in the same 'big bang' group,” John Oxford, a virology expert at Queen Mary, University of London told BBC News.

The London patient had recently traveled to Saudi Arabia where it is suspected he picked up the virus; the two confirmed infections shared 99.5 percent sequence identity. Experts are investigating other suspected cases in the Middle East and preparing outbreak responses if needed, but the WHO has yet to issue any travel restrictions or advice.

“For the moment, we're just assuming there were two individual infections, probably from some animal reservoir,” Ron Fouchier, a virologist at Erasmus MC in Rotterdam in the Netherlands and a lead researcher on one of the two recently publicized H5N1 papers, told ScienceInsider. “They occurred 3 months apart, which is too long for one to have infected the other,” added Fouchier, who sequenced the new virus's genomes from the two confirmed cases. “So let's keep both feet on the ground and not blow this out of proportion.” 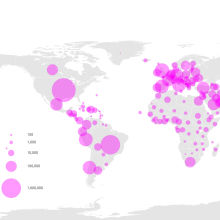