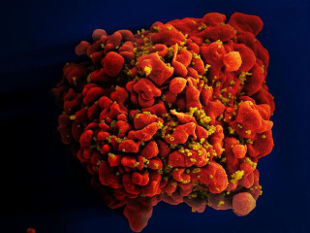 HIV-infected T cellFLICKR, NIAIDThe T-cell surface receptor CD4 is necessary for HIV to enter host cells. Once the virus is inside, however, the CD4 receptor makes HIV vulnerable, by altering the conformation of the envelope glycoprotein in a way that exposes it to effective antibodies. To evade this immune response, HIV-1, the most common serotype of the virus, downregulates CD4. To make the virus susceptible to antibody-based destruction once again, researchers decided to present infected cells with small molecule mimics of CD4, forcing HIV’s envelope glycoprotein back into a vulnerable state. Their results were published today (May 4) in PNAS.

“The virus has to get rid of the CD4 proteins to protect itself,” study coauthor Jonathan Richard, a postdoctoral researcher at the University of Montreal’s CHUM Research Centre, said in a press release. “Adding the small molecule forces the viral envelop to open, like a flower....

The results could be key to an effective treatment, added study coauthor Andrés Finzi, also of the CHUM Research Centre. “We found that people infected with the HIV-1 virus have naturally occurring antibodies that have the potential to kill the infected cells. We just have to give them a little push by adding a tiny molecule that acts as a can opener to force the viral envelope to expose regions recognized by the antibodies, which forms a bridge with some cells of the immune system, initiating the attack.”

Be sure to check out The Scientist’s May issue, focused on HIV, which includes feature stories on the virus’s latent reservoir and the latest advances toward an HIV vaccine.