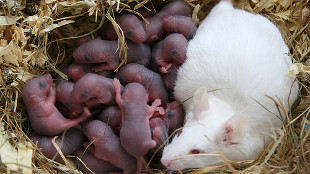 The hormone oxytocin alters the activity of neurons in the left auditory cortex of a mouse mother’s brain, making her more in tune with the distress cries of lost pups, according to a study published this week (April 15) in Nature.

Mouse mothers often move from nest to nest to avoid predators, carrying their offspring with them. The babies that fall off during the move cry out, prompting the mothers to backtrack and retrieve their lost pups. While mother mice respond to the cries by picking up the pups, even those that are not their own, virgin females generally ignore the ultrasonic distress calls.

To understand the brain change that makes mothers more responsive to pups’ cries, researchers from New York University (NYU) injected oxytocin into the sound-processing auditory cortex of virgin females. The presence of the hormone caused the virgin females to retrieve the pups....

A single dose of oxytocin was enough to produce the effect. Oxytocin appears to coordinate the neuronal response and may be involved in learning and memory formation related to the sound of the distress calls. The scientists found that the left auditory cortex, in particular, contains neurons that are rich in receptors for oxytocin, and demonstrated that the hormone both enhances excitatory signals and reduces inhibitory signals there. Blocking the activity of the left auditory cortex with a drug caused the mothers to ignore the calls of their offspring.

“We found that oxytocin turns up the volume of social information processed in the brain,” study coauthor Robert Froemke of NYU told The Guardian. “It seemed to transform the virgin brain into the more experienced mother.”