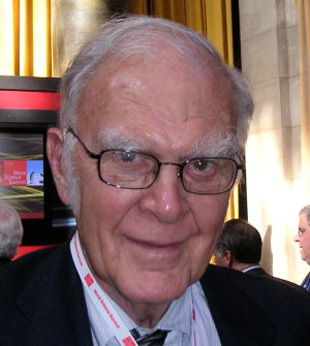 US chemistry professor Frank Sherwood Rowland, who was awarded the Nobel Prize in Chemistry in 1995 for his work on the depletion of the Earth’s ozone layer, died last Saturday (March 10) at the age of 84 from complications from Parkinson’s disease.

In 1974, Rowland and his postdoc Mario Molina, published a paper in Nature showing that the chlorine atoms released from chlorofluorocarbon (CFC) compounds—widely used at the time as refrigerants, cleaning solvents, and in aerosol sprays—could initiate a chain reaction in the atmosphere that resulted in the catalytic destruction of ozone molecules. A single chlorine atom, he found, can break apart up to 100,000 ozone molecules and persist in the atmosphere for up to a century.

The finding was not well received, and Rowland was derided both by the industry and his...

Eleven years later, in 1985, however, scientists discovered the hole in the ozone layer over Antarctica—a finding that not only exonerated Rowland, but also led to the landmark 1987 Montreal Protocol, which banned the production of CFCs.

"He saved the world from a major catastrophe: never wavering in his commitment to science, truth and humanity, and did so with integrity and grace," UC Irvine Dean Kenneth Janda wrote in an email to the faculty, ScienceInsider reported.

Sherwood is survived by his wife, Joan, as well as his two children and two grandchildren.