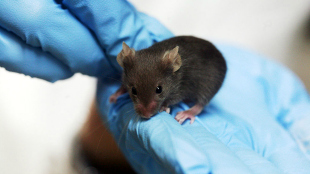 WIKIMEDIA, RAMAScientists have found a particular neural cell type that blocks the relay of pain and itch sensations from the spinal cord to the brain in mice. The existence of such cells had been proposed 50 years ago as part of a “Gate Control Theory” of pain.

“Evidently, the neurons don’t just control pain, but also various forms of itch,” Hanns Ulrich Zeilhofer, a pain researcher at the University of Zürich, said in a press release.

Zeilhofer’s team found that blocking the activity of certain inhibitory neurons in the dorsal horn of the spinal cord caused pain and itching in mice, whereas inducing their activity alleviated the symptoms. The researchers published their results in Neuron this month (March 18).

“This strongly suggests that glycine-producing interneurons are a key component of a spinal gate that controls the relay of pain and itch signals,” reported The Guardian, noting that...

Whether such gatekeeper cells could be exploited to block pain and itch feelings in people remains to be seen. “The targeted stimulation or inhibition of particular types of neurons in humans is still a long way off and might only be possible in a few decades’ time,” Zeilhofer said in the release.