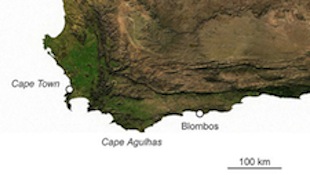 WIKIMEDIA, VINCENT MOURRE / INRAP, BASED ON SOUTH AFRICA SAT.JPG, PUBLIC DOMAINAncient human ancestors, like humans today, had trends in fashion that came and went. In Blombos Cave in South Africa, researchers uncovered shell beads from 75,000 to 72,000 years ago that show relatively rapid changes in how they were designed, ScienceNOW reported.

The ornaments themselves, small and rounded African tick shells called Nassarius kraussianus, were consistent. But shells in different archeological layers appeared to have been strung together in different patterns.

The researchers measured this variation by looking at patterns of wear on the shells. The ancient people appeared to have punched holes in them with bone tools in order to string them together, and by looking at asymmetrical wear around the holes the researchers were able to establish their orientation. They also looked at patterns of rubbing on other parts of the shells.

They concluded that early on, the shells were strung in alternating orientations all in a row, while later on the pairs of shells were knotted in intervals along the string.

Olaf Jöris, an archeologist at the MONREPOS Archaeological Research Center in Germany, told ScienceNOW that he was impressed with the study’s depth but wondered if there were explanations for the wear patterns the researchers hadn’t thought of. For instance, the shells could have been sewn onto clothing, another style choice seen in later Paleolithic times in Europe.