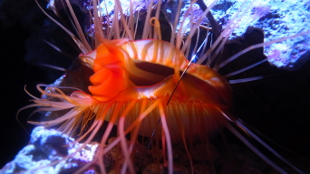 WIKIMEDIA, OPENCAGEThe so-called disco clam Ctenoides ales took the human world by storm last summer when researchers revealed the secret behind its flashing lips, but it was unclear how the light display might benefit the mollusk. This week (January 4), the same team of scientists proposed a potential explanation at the annual meeting of the Society for Integrative and Comparative Biology in West Palm Beach, Florida.  The clam’s blinking lips, together with a distasteful chemical discharge, help the animal to fend off fierce predators.

After coming across the disco clam on a dive in Indonesia, study coauthor Lindsey Dougherty of the University of California, Berkeley, and her colleagues determined that small beads of reflective silica nestled inside the edge of the clam’s quivering red lip were responsible for the light show. For a follow-up study presented at the meeting, the scientists tested three possible functions of this showy...

The researchers found that the flash effect would be an ineffective mating display because the clams have poor vision. In the presence of both simulated predators and phytoplankton prey, however, the clam doubled its flashing rate. In the final test, the clams shared their tank with a fierce and powerful predator, the mantis shrimp.

Dougherty’s team was surprised to find that the clam’s flashes caused the shrimp to recoil and enter a catatonic state. “[Mantis shrimp] are very aggressive critters, and to have a clam open and flashing, and the mantis shrimp not attacking, is very weird,” Dougherty told LiveScience. Further tests revealed that the clam’s tentacles contained sulfur, an unpleasant-tasting chemical that could drive away shrimp and other foes. The scientists now hope to confirm the protective purpose of the clam’s behavior in the wild.