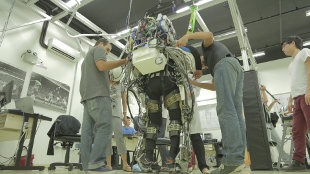 The suit that Nicolelis helped build in the laboratoryBIGBONSAI + LENTEVIVA FILMESJuliano Pinto, a 29-year-old Brazilian man, wore a robotic suit that worked via a brain-machine interface (BMI) and nudged a soccer ball with his foot, sending it rolling down a short mat in Sao Paulo’s Corinthians Arena yesterday (June 12). The gesture was small, but it was the culmination of years of research, carried out by dozens of scientists studying BMIs. And it was the ceremonial first kick of soccer’s World Cup, which got underway with a match between host nation Brazil and Croatia (Brazil won 3-1).

“We did it!!!!” tweeted Miguel Nicolelis, the Duke University neuroscientist who headed the team of researchers that worked on the project. Seven other paralyzed people who had trained alongside Pinto watched from the sidelines. “It was a great team effort, and I would like to especially highlight the eight patients...

Pinto’s suit included an electroencephalogram (EEG) cap containing electrodes that magnified nervous impulses from his brain and sent them to processors that decoded the signals and then relayed them to hydraulics that moved the exoskeleton strapped to his legs.

Despite Nicolelis’s exuberance, other researchers working on BMI weren’t so impressed. “The demo did not advance the state of the art,” Jose Contreras-Vidal, a biomedical engineer at the University of Houston, told NBC News. His team has been working on their own BMI exoskeleton, the NeuroRex, a suit that pioneered the EEG-based control of bionic legs. “Certainly our NeuroRex was the first and remains the only brain-controlled exoskeleton to allow spinal cord injury patients to walk over-ground unassisted, and we have been able to do so with about 10 percent of the funding Dr. Nicolelis has received to develop their exo.” The Brazilian government poured $14 million into the Walk Again Project over the past two years, Nicolelis told Agence France-Presse.