SCREEN GRAB, YOUTUBEBill Kochevar, 56, has regained some control over his right arm and hand, 10 years after becoming quadriplegic following a bike accident. This partial reversal of his paralysis is thanks to technology that allows Kochevar, with the help of two recording chips in his motor cortex and 36 electrodes in his right arm, to control a mechanized harness on which he rests his arm using only his thoughts,  according to a study published this week (March 28) in The Lancet.

“I was completely amazed,” Kochevar told MIT Technology Review. In a lab at Case Western Reserve University in Cleveland, Ohio, he sipped from a straw and fed himself for the first time in a decade. “I thought about moving my arm and I could move it,” he told NPR’s Shots.

The neuroprosthetic device is not the first to restore voluntary movement to paralyzed patients. Last April, Ian Burkhart, who was paralyzed in a diving accident in 2012, made headlines after he regained control of his hand and arm using an electrode array implanted in the part of his motor cortex that controls hand movements and a sleeve of 130 electrodes worn on his forearm.

Neuroprosthetics take advantage of the motor commands that normally trigger the spinal cord to initiate a movement, but in the case of Kochevar and Burkhart, that pathway has been blocked. “What we are doing is circumventing the spinal cord injury,” Case Western Reserve biomedical engineer Bolu Ajiboye, who led the new study, told Techn Review.

In Kochevar’s case, the researchers implanted two chips in his motor cortex to record the outgoing signals, which are transmitted to a computer for processing and then to the electrodes embedded in his arm. Using the neuroprosthetic device takes some practice, but it’s working: Kochevar is now making limited, slow movements with not just his hand—as Burkhart has been able—but with his arm as well, even figuring out how to scratch his nose, Shots reported. 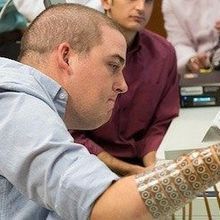 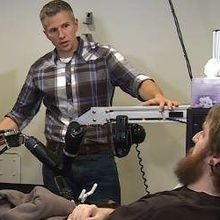