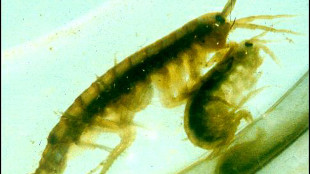 A parasite (Pleistophora mulleri) roughly the size of a human blood cell can alter the behavior of freshwater shrimp (Gammarus duebeni celticus), making adults twice as likely to consume young members of their own species, according to a study published this week (March 18) in Royal Society Open Science. Although cannibalism has been demonstrated in more than 3,000 species, the study is the first demonstration of a parasite influencing the behavior.

Adult shrimp were already known to consume juveniles on occasion, a practice that contributes to the spread of the parasite via cannibalism. The parasite, which is specific to this species of shrimp, then invades the shrimp’s muscles, damaging them and driving an insatiable need for food.

To examine the impact of parasitic infection on cannibalistic behavior, scientists from the University of Leeds in England, Stellenbosch University in South Africa,...

“Increased demand for food by the parasites may drive the host to be more cannibalistic,” study coauthor Mandy Bunke of Leeds told Discovery News. “We have also found in earlier work that infected shrimp may be able to catch and eat less prey of other animal species, so perhaps cannibalism of smaller shrimp is the only way these sick animals can survive,” study coauthor Alison Dunn of Leeds added in a statement.

The parasite’s impact on G. duebeni celticus behavior could also further disadvantage the shrimp’s survival, which is already threatened by the invasive species G. pulex.