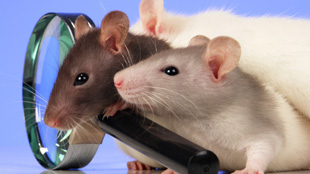 Over the past several years, evolutionary biologists have come around to the idea that traits don’t need to be encoded in an organism’s DNA to be passed down to their offspring. Rather, epigenetic changes to one’s genome is often sufficient. Now, a new study shows that this non-genetic inheritance applies to stress in rats—and can affect at least two generations down the line.

According to a new study published yesterday (May 21) in the Proceedings of the National Academy of Sciences (PNAS), the male descendants of rats that were exposed to the fungicide Vinclozolin while pregnant are more anxious and sensitive to stress. The fungicide is believed to effect such changes by disrupting androgen receptor signaling, thus altering the DNA methylation in the male germline. The results offer the first example of transgenerational epigenetic inheritance of a stress-related trait, and adds to the growing body of evidence linking...

"We are now in the third human generation since the start of the chemical revolution, since humans have been exposed to these kinds of toxins," David Crews, a zoologist at the University of Texas, at Austin and one of the paper’s lead authors, said in a press release. "This is the animal model of that."

Previous research had also shown that exposure to Vinclozolin, which binds to and inhibits the function of the androgen receptor in humans and rats, increases the prevalence of certain tumors across multiple generations as well as reduces fertility in male descendants.