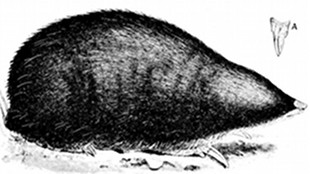 The Hottentot golden mole woos females based on the size of its penis—and females prefer a male with a long reproductive organ, according to a study published last month (January 26) in the journal Mammalian Biology.

Philip Bateman, a biologist at the University of Pretoria in South Africa and one of the study’s authors, speculated that the blind, subterranean creatures use penis size to take the measure of a potential mate because they can’t see use more showy forms of sexual selection, which require visual displays. “Judging penis size when mating may be one of the only criteria they have available to them,” Bateman told BBC Nature. The creatures might be able to feel the penis in the dark and reject complete mating attempts if it isn’t long enough, he explained, and the ability to invest resources in a long penis...

The researchers came to their conclusions after measuring penis size and other bodily proportions in 69 male golden moles, which are endemic to sub-Saharan Africa. The golden moles are only around 3 to 4 inches long and their penises measure only a fraction of an inch. Despite their small size, however, the researchers found that penis size was the most variable traits in the tiny animals, a sign that it is sexually selected.

Female bats and mole-rats in dark environments or seals in turbid water might also rely on the feel and size of the penis to choose whether to copulate, the researchers said. But humans, who have a more elaborate pre-sex ritual, would be less likely to rely on such metrics. “We tend to have a whole lot of pre-copulatory mechanisms to choose mates,” Bateman told the BBC.  In humans, “penis size really is something that is only discovered once a mate choice has already been made.”