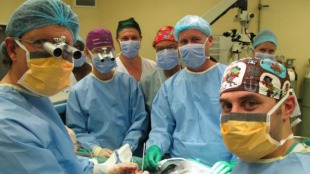 STELLENBOSCH UNIVERSITYA man who lost his penis after a circumcision went badly is the second to have received a penis transplant. But he may the first to end up with a fully functional reproductive organ.

“He had such a smile on his face—this amazed look when we took the bandages off,” plastic surgeon Frank Graewe at the Stellenbosch University told Vice News. “Three months later he’s having regular intercourse with his partner. We’re surprised about the progress that he’s made.”

The 21-year-old man from South Africa underwent surgery back in December 2014. According to BBC News, surgeons used techniques from face transplants to connect the donor organ and its many miniscule blood vessels.

The patient now can urinate, sustain an erection, and ejaculate. He has yet to gain full sensation in the penis, but doctors expect he will over the next couple of years.

The first man to have received a penis transplant, in China, had the operation reversed.