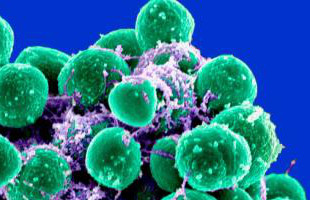 Staphylococcus epidermidis, one of the many species the researchers identified from the participants' samples.WIKIMEDIA, NIAID

The human skin microbiome has received increasing attention, but a new study has found that people are also surrounded by their own personal clouds of microbes in the air. In a paper published yesterday (September 22) in PeerJ, researchers from the University of Oregon and their colleagues reported that some individuals could be uniquely identified by the combination of bacteria in the air surrounding them.

The team asked 11 participants to sit in a sterilized, climate-controlled chamber for up to four hours. Surrounding the participants were Petri dishes and suspended air filters designed to catch the microbes each individual emitted. After the study period, the researchers sequenced the DNA in these samples to categorize the microbial communities for each person. The combinations of bacteria in each community allowed the researchers to distinguish...

“We expected that we would be able to detect the human microbiome in the air around a person, but we were surprised to find that we could identify most of the occupants just by sampling their microbial cloud,” study coauthor James Meadow, a former postdoc at Oregon who’s now a data scientist at San Francisco-based Phylagen, said in a press release.

“When we look at a complex environment like a home or a hospital, we don’t see those individual variances. It’s too complex,” microbial ecologist Jack Gilbert from the University of Chicago, who was not involved with the work, told The Atlantic. “So having these very controlled environments helps us to see the impact of these very small and subtle variables in people that may influence their cloud.”

The authors noted that while the microbes were enough to identify individual participants in a sterile setting, contamination could skew the results. “Translating this to someone sitting in an office or a patient in a hospital, where there’s going to be a lot of background, will take a lot more,” study coauthor Adam Altrichter of Oregon told Smithsonian. “But hopefully as technology progresses and we are able to reduce the lowest detection limits, we can maybe push the envelope a little bit and start to capture a personalize signature in a more realistic environment.”