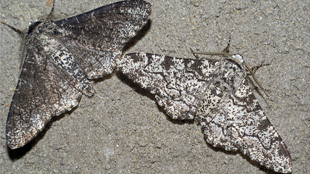 Although the peppered moth has been the poster child of Darwinian evolution since the late 19th century, over the past decade there’s been a public debate questioning the validity of this textbook example. In particular, scientist questioned whether birds were really the agents selecting between the light– and dark-colored moths, which rest on light or soot-covered trees, among other things.

To lay the matter to rest, a late evolutionary biologist from the University of Cambridge, Michael Majerus, carried out a 7-year study in a hamlet close to his home in Cambridge, England, the results of which were published yesterday (February 8) in Biology Letters.

“These data provide the most direct evidence yet to implicate camouflage and bird predation as the overriding explanation for the rise and fall of melanism in moths,” the authors wrote...

According to Majerus, the controversy started back in the late 1990s, when Nature ran a review of his book Melanism: Evolution in Action suggesting that “the peppered moth case is fatally flawed as an example of Darwinian evolution,” he explained in a talk back in 2004. Newspapers and other media outlets picked up the review and further discredited the peppered moth story, providing fodder for evolution skeptics.

As a result, Majerus decided to embark on a long-term project, releasing and tracking the fates of 4,864 moths. He found that dark moths had indeed a lower survival than light-colored moths in the relatively unpolluted Cambridge forests.

Majerus died in 2009 from an aggressive case of mesothelioma. Four of his colleagues then proceeded to analyze and publish his results.