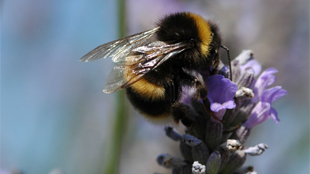 A buff-tailed bumble bee, Bombus terrestris. This image relates to the paper by Dr. Whitehorn and collegues.SCIENCE/AAAS

Two studies published online March 29 in Science hint that a specific class of pesticides, neonicotinoids, could be contributing to colony collapse disorder in bees. In one study, bumble bees exposed to a neonicotinoid produced fewer queens, while honey bees had trouble finding their way home, reported BBC News. These side effects of pesticide exposure could play a role in colony collapse disorder, the researchers say, and more thorough toxicity tests should be performed before new pesticides are approved for use.

Neonicotinoids, which began replacing more human-toxic pesticides in the 1990s, are applied to growing plants and become incorporated into pollen and nectar, where bees encounter them. A French study looked at the effect of the neonicotinoid thiamethoxam on honey bee navigation. The bees were tagged with RFID chips and tracked....

"To date, the tests mostly require that the doses found in nature do not kill bees," Mickaël Henry, the first author of the study, told the BBC. "But those authorization processes ignore possible consequences for the behavior of bees, and we hope the people in charge will be more careful."

In the bumblebee study, UK scientists fed bees pollen and sugar water laced with imidacloprid, another neonicotinoid, for 2 weeks in the lab. The bee colonies were then transplanted to the field, and their weight measured after 6 weeks. The colonies exposed to imidacloprid weighed less, implying that the bees had brought less food back. Most strikingly, these colonies produced many fewer queens (2) than control colonies (14).

"I wouldn't say this proves neonicotinoids are the sole cause of the problems bees face," Dave Goulson, who led the bumble bee study, told the BBC, "but it does suggest they're likely to be one of the causes, and possibly a significant one.”