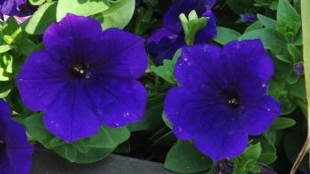 FLICKR, BUDDYSAULThough blue petunias are beautiful, until now scientists did not understand how their color arose. Researchers have shown that the PH1 gene encodes protein that works with a proton pump to hyperacidify vacuoles in petal cells and create the typical violet or red color. When PH1 is mutated, vacuoles are less acidic, which results in blue petals. Their work was published in Cell Reports last week (January 2).

“Already in the 1910s it was proposed that blue flower colors were caused by reduced acidity of the ‘cell sap.’ Others figured that drastic changes in the cell sap might cause terrible deleterious defects, and proposed that blue flower colors had something to do with the formation of metal-anthocyanin complexes,” coauthor Francesca Quattrocchio of VU University Amsterdam in the Netherlands said in a statement. “Our current opinion is that both got it right.”

Quattrocchio and colleagues showed that...

“By studying the difference between blue and red flowers of petunias, we have discovered a novel type of transporter able to strongly acidify the inside of the vacuole,” Quattrocchio said in the statement.