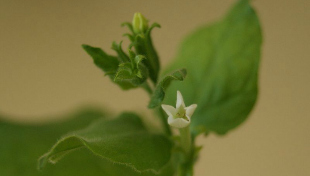 WIKIMEDIA, CHARLES ANDRESRather than relying on industrial labs to synthesize pheromones to attract or repel crop pests, researchers have genetically engineered plants to do such work for them. Writing in Nature Communications this week (February 25), plant biologists report on genetically engineered tobacco plants that produce a moth sex pheromone. Once extracted from the plant, the pheromone can be used to trap male moths.

“It will change the way that commercial pheromone outfits do business and will significantly enhance the quality and potentially lower the cost of the products that they provide,” Steve Seybold of the US Department of Agriculture Forest Service’s Pacific Southwest Research Station in Davis, California, told ScienceNow.

Plant-produced pheromones might also reduce the use of harmful chemicals in pheromone production. “What we demonstrated in this study is a more environmentally friendly approach that avoids the need to use toxic chemicals and eliminates hazardous...

Tobacco is used in a variety of so-called “molecular farming” (or biopharming) pursuits, including the development of an HIV medicine and vaccines.

Christer Löfstedt, a chemical ecologist at Lund University in Sweden who led the pheromone project, told ScienceNow that next he’d like to bypass the extraction step and have plants do the rest. “Right now, we derive pheromone components from plants and prepare baits for trapping from these products, but our next goal is to develop [genetically modified] plants that can release these pheromones into the environment.”