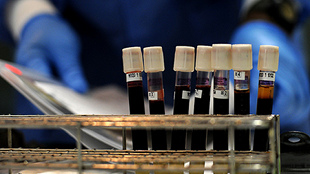 FLICKR, KENNY HOLSTONBetween 1988 and 1997, an anesthesiologist from Valencia, Spain, infected 275 of his patients with the hepatitis C virus, according to Spanish courts. Earlier this month (July 19), researchers from University of Valencia who helped establish the timing and victims of the outbreak for the courts published their account of the case in BMC Biology.

The anesthesiologist, Juan Maeso, is believed to have been infected with the blood-borne virus himself and then to have spread the infection by injecting himself with painkillers from the same needles he used to inject his patients.

The researchers then used molecular clocks to calculate when the patients had been infected, based on the expected rate of viral evolution and calibrated using information from the few patients whose dates of infection were known. They determined that the anesthesiologist had likely been infected in 1988, around the time the first patient infections were estimated to have occurred.

“In the case described here, we used the fast evolutionary rate of HCV to disentangle a large and complex transmission process from a single source to almost 300 recipients spanning over a decade, a period during which the infecting viral population underwent evolutionary changes itself,” the researchers wrote in the paper.

The anesthesiologist was sentenced in 2007 to 1,933 years in prison and ordered to make extensive payments to victims.