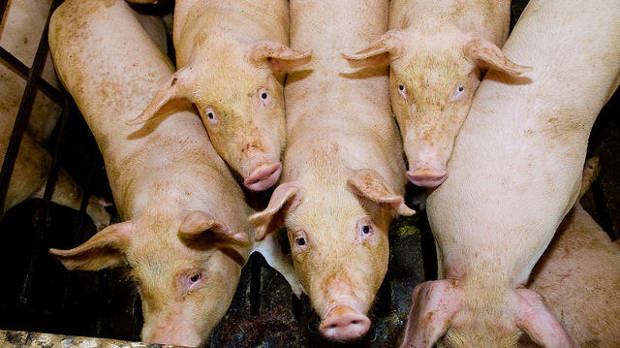 FLICKR, UNITED SOYBEAN BOARDPigs can catch the Japanese encephalitis virus, the leading cause of childhood encephalitis in Asia, directly from other pigs, bypassing the mosquito vector once thought to be necessary for viral spread, according to a study published last week (February 23) in Nature Communications. When researchers housed healthy pigs with animals they’d injected with the virus, some of the healthy swine also became infected, and the virus stayed in the pigs’ lymphatic tissue and tonsils for weeks.

It is unclear if this form of sharing the disease also occurs outside of the lab. “It’s probably not the dominant mode of transmission,” Juliet Pulliam, a virologist at the University of Florida in Gainesville who was not involved in the research, told Science. But pig-to-pig transmission could explain how the virus sometimes persists year-round, even in the winter when mosquito populations decline.

This is the first study to demonstrate mosquito-free spread of the Japanese encephalitis virus, but previous research has shown that the closely related West Nile virus can be transmitted directly from bird to bird. And recent reports have suggested that the mosquito-borne Zika virus may be transmitted sexually between humans. “As we’re getting better at looking at things, people are noticing these weird patterns,” Pulliam told Science. “We’re starting to pick up on things that maybe we wouldn’t have picked up on before.”