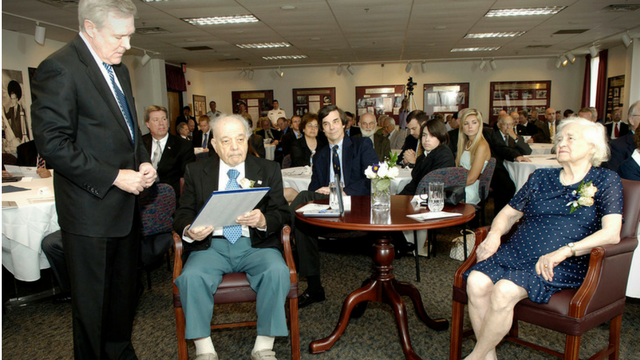 Jerome and Isabella Karle received the Department of the Navy Distinguished Civilian Service Awards upon their retirement from the Naval Research Laboratory in 2009.WIKIMEDIA, JOHN F. WILLIAMSIsabella Lugoski Karle, a pioneering chemist who with her husband helped develop a groundbreaking and still-popular method for visualizing the structure of molecules, died earlier this month (October 3) in Arlington, Virginia. She was 95.

Karle’s husband, Jerome Karle, who passed in 2013 at age 94, had developed the technique of X-ray crystallography in the 1950s. This is based on analyzing the patterns of light that bounce off a crystallized molecule. It remains the most widely used method for determining the three-dimensional structure of molecules.

Jerome Karle received the Nobel Prize in Chemistry along with Herbert Hauptman in 1985. Isabella Karle played a big role in his work by demonstrating how the technique could be used.

She had used it to explore the...

Karle was born in Detroit in 1921 to Polish immigrants. From an early age, she was inspired to pursue chemistry by a female high school chemistry teacher as well as a biography of Marie Curie, a Nobel Prize-winning physicist also of Polish origin. She went on to pursue bachelor’s, masters, and doctoral degrees, which she accomplished before the age of 23.

Along with her husband, Karle had worked on the Manhattan Project, the research program during World War II that led to the development of the first nuclear weapons. They later moved to the U.S. Naval Research Laboratory in Washington D.C. and started their work on crystallography. Upon receiving the Nobel, Jerome Karle had told The Los Angeles Times that his wife also deserved the prize: “I can’t think of anyone who is more qualified than my wife.”

The cause of death had been a brain tumor, according to The Washington Post. Karle is survived by her daughters Louise Karle Hanson, Jean Karle Dean, and Madeleine Karle Tawney–who are all scientists–four grandchildren, and a great-granddaughter.