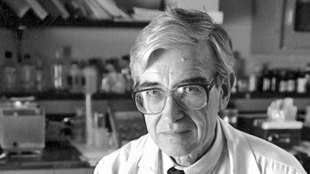 Peter Huttenlocher, a giant in the field of brain development, died August 15 of pneumonia and complications of Parkinson’s disease. He was 82. Huttenlocher’s innovative approach to counting billions of synapses in the brain led to the discovery in the late 1970s that brain cell connections proliferate rapidly during an infant’s first year, and then undergo progressive “pruning” throughout life —a finding that revolutionized the way scientists, physicians, and parents view brain development.

“It would be hard to think of another discovery that is so central to our understanding of pediatric neurology,” Huttenlocher’s friend and colleague Eric Kandel, a Nobel Prize-winning neuroscientist at Columbia University, said in a statement.

Huttenlocher, a professor emeritus and former section chief of pediatric neurology at the University of Chicago Medicine, was able to correlate the timing of upticks in synapse formation in various brain areas with the acquisition of...

Born in Oberlahnstein, Germany, Huttenlocher emigrated to the US when he was 18 to attend the University of Buffalo in New York. He earned his medical degree from Harvard University in 1957, and then completed research stints at the National Institutes of Health and Yale University. He moved to the University of Chicago in 1974. Throughout his research career, Huttenlocher maintained his clinical practice, focusing on the treatment of rare neurological and seizure disorders in children.

“Here’s a person who was looking for the physical underpinnings of abnormalities of brain function, and that is a difficult thing to do even today,” Jeff Lichtman, a developmental neurobiologist at Harvard, told The New York Times. “It’s still a central challenge in brain science and here was a person who was years ahead, decades ahead of his time.”

Huttenlocher is survived by his wife, three children, and four grandchildren.