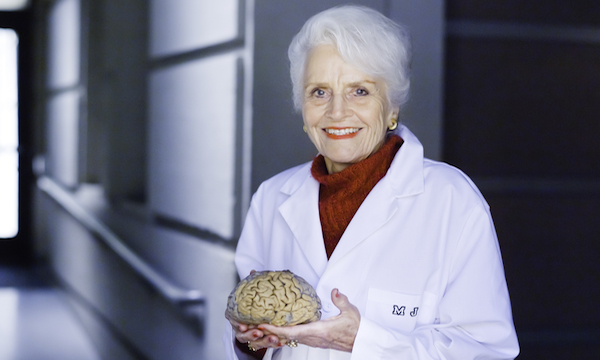 Marian Cleeves Diamond, a neuroscientist who discovered that the brain was malleable to life experiences, died on July 25 at the age of 90.

In the 1960s, Diamond’s experiments with rats revealed that animals raised in enriched cages were better able to navigate mazes and had thicker cerebral cortices than rodents that grew up with impoverished surroundings. This discovery came at a time when most scientists believed that nature, rather than nurture, was the key factor that shaped the brain.

“The idea that the brain could change based on environmental input and stimulation was felt to be silly,” Robert Knight, a University of California, Berkeley, (UCB) professor of psychology and neuroscience, tells the Washington Post. “And that’s the boat she completely sunk.”

Diamond is also known for her investigations of Albert Einstein’s brain. After receiving four preserved slices of the...

Born in Glendale, California, Diamond attended Glendale Community College before transferring to UCB, where she received her bachelor’s, master’s, and doctorate degrees.

In 1955, Diamond became Cornell University’s first female science instructor. She returned to Berkeley as an anatomy professor five years later and taught there until she retired in 2014. Outside the traditional classroom, Diamond was also a popular lecturer on Youtube—one of her videos has amassed more than 1 million views.

According to the Washington Post, Diamond was known on campus as the “woman with the hat box” because she regularly carried a preserved brain around campus to use as a prop during her lectures.

“Marian Diamond [will be] remembered as an esteemed colleague, a friend and a gentle soul who by nature and nurture sought to extend happiness and accomplishment to her students, colleagues and others,” UCB colleague George Brooks, a professor of integrative biology, says in a statement.