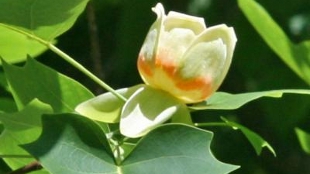 The tulip tree (Liriodendron tulipifera) BIOMED CENTRAL, GARY COTEThe mitochondrial genome of the tulip tree (Liriodendron tulipifera), known to be one of the slowest evolving plant genomes, retains many of the ancestral traits lost by other flowering plants over the last 200 million years of evolution, according to research publishing this week in the open access journal BMC Biology. The newly sequenced genome could thus serve as a critical tool in understanding the evolution of flowering plants, the authors argue.

In plants, the lack of ancient genomic data has made evolutionary reconstruction difficult. So the researchers compared genomes of two flowering plants—Magnolia stellate and Calycanthus floridus—with that of the slow-to-evolve L. tulipifera to reconstruct the frequency of genetic changes in flowering plants in general. They confirmed the Liriodendron mitochondrial genome’s exceptionally slow rate of evolution—“with the lowest known genome-wide absolute silent substitution rate,” they...

“Based on this, it appears that the genome has been more-or-less frozen in time for millions and millions of years,” lead author Jeffrey Palmer said in a press release.