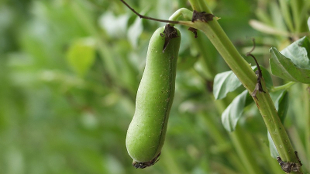 A broad bean plant (Vicia faba)WIKIMEDIA, KARUOJISAN FROM JAPANPlants can warn each other of insect attacks by communicating via the symbiotic fungi wrapped around their root systems, according to a study out this week (May 9) in Ecology Letters.

When aphids attack, bean plants (Vicia faba) release chemicals that repel the herbivorous insects and attract parasitoids that hunt the aphids. British researchers have now demonstrated that the same chemical responses are induced in bean plants that are not under direct aphid attack, but only if they connected to aphid-infested bean plants by a network of thread-like mycorrhizal mycelia—symbiotic fungal structures known to help gather more nutrients for the plants.

The mechanism of communication is not clear, but the researchers suspect it is likely to be a chemical signal passed through this underground fungal network. The plants were covered with bags during the experiment...

“In the past, we thought of [symbiotic fungi] making nutrients available from the [roots and soil], but now we see another evolutionary role for them in which they pay the plant back by transmitting the signal efficiently,” coauthor John Pickett of agricultural research institute Rothamsted Research in the U.K. told BBC News.

The findings could help researchers protect crops that suffer from aphid damage by introducing a plant that is particularly susceptible to aphid infestation into the field. When aphids attack, that plant would send an early warning signal to other plants through this underground fungal connection.