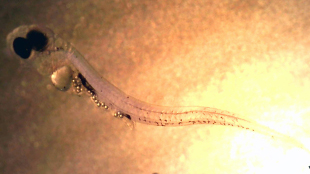 Update (December 21, 2017): Science today posted an addendum to its retraction of the paper by Oona Lönnstedt and Peter Eklöv following the completion of a University of Uppsala investigation. That addendum noted that the investigation found both researchers “violated the regulations on ethical approval for animal experimentation; and that Lönnstedt fabricated experimental results reported in the paper.”

“I take full responsibility for the [issues] with the ethical permit. We have looked at our routines now, and it should not happen again,” Eklöv told Science in an interview earlier this month, after the university investigation was released. “But most of all I'm very disappointed by my colleague—to find out that she actually did fabricate data, which is very serious. This is a person I very much trusted, and now it's been shown that she was dishonest, not only to me...

Update (May 3): Today Science retracted the paper in question, citing the Central Ethical Review Board’s report. According to the retraction notice, the authors told Science that they disagreed with “elements of the Board’s report,” but on April 28 they did ask to retract the paper.

Update (May 1, 2017): Oona Lönnstedt and Peter Eklöv of Uppsala University committed “scientific dishonesty,” according to a report from Sweden’s Central Ethical Review Board (CEPN), which recommended that the paper be retracted. The finding is a “huge relief,” Uppsala University’s Josefin Sundin, one of seven whistleblowers in the case, told Science.

Update (December 5, 2016): Science last week (December 1) added an Expression of Concern to this paper. In it, Editor in Chief Jeremy Berg explained that the authors said a computer on which raw data had been stored was stolen. “These data were not backed up on any other device nor deposited in an appropriate repository,” Berg wrote. “Science is publishing this Editorial Expression of Concern to alert our readers to the fact that no further data can be made available, beyond those already presented in the paper and its supplement, to enable readers to understand, assess, reproduce or extend the conclusions of the paper.”

Tiny plastic particles can affect a variety of fish behaviors, researchers at Uppsala University in Sweden have found. European perch (Perca fluviatilis) larvae exposed to environmentally relevant concentrations of polystyrene preferred to eat the plastic over their natural prey and “were less active, less responsive to predator cues, more likely to be eaten, and less likely to thrive,” the team wrote in Science last week (June 3).

“This is the first time an animal has been found to preferentially feed on plastic particles, and is cause for concern,” study coauthor Peter Eklöv of Uppsala told The Guardian.

“They all had access to zooplankton and yet they decided to just eat plastic in that treatment. It seems to be a chemical or physical cue that the plastic has, that triggers a feeding response in fish,” study coauthor Oona Lönnstedt, also of Uppsala, told BBC News. “They are basically fooled into thinking it’s a high-energy resource that they need to eat a lot of. I think of it as unhealthy fast food for teenagers, and they are just stuffing themselves.”

According to Chemical & Engineering News (C&EN), the Uppsala group has since documented similar effects of microplastics in damselfish, pike, and flounder.

Researchers have called for a widespread ban on microplastic particles, which are found in some personal care and other consumer products. Keeping these pollutants from entering aquatic environments is “essential for the survival of countless species in whose ecological niches plastic has insinuated itself in the most insidious ways,” Charles Moore of Algalita Marine Research Foundation who was not involved in the study told C&EN.