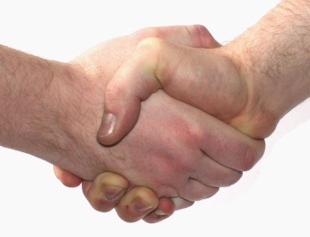 WIKIMEDIA, TOBIAS WOLTERFollowing a handshake with someone of the same sex, people increased the amount of time they spent touching their faces with their right hands, according to a study published this week (March 3) in eLife. And when their hands were in proximity to their faces, the handshake study participants had increased nasal airflow, suggesting they were smelling their hands.

“It is well-known that we emit odours that influence the behaviour and perception of others but, unlike other mammals, we don’t sample those odours from each other overtly,” study coauthor Noam Sobel, chair of neurobiology at Israel’s Weizmann Institute of Science, said in a press release. “Instead, our experiments reveal handshakes as a discreet way to actively search for social chemosignals.”

Sobel and his colleagues used hidden cameras to film 280 people greeted with or without a handshake. Following the interaction, the researchers saw that all...

“Our findings suggest that people are not just passively exposed to socially significant chemical signals, but actively seek them out,” coauthor Idan Frumin, a research student in Sobel’s lab, said in a press release. “Rodents, dogs, and other mammals commonly sniff themselves, and they sniff one another in social interactions, and it seems that in the course of evolution, humans have retained this practice—only on a subliminal level.”

Charles Wysocki of the Monell Chemical Senses Center in Philadelphia agreed. “It fits with the general idea that there is a lot more chemical communication going on that we are unaware of,” Wysocki, who was not involved in the research, told New Scientist.